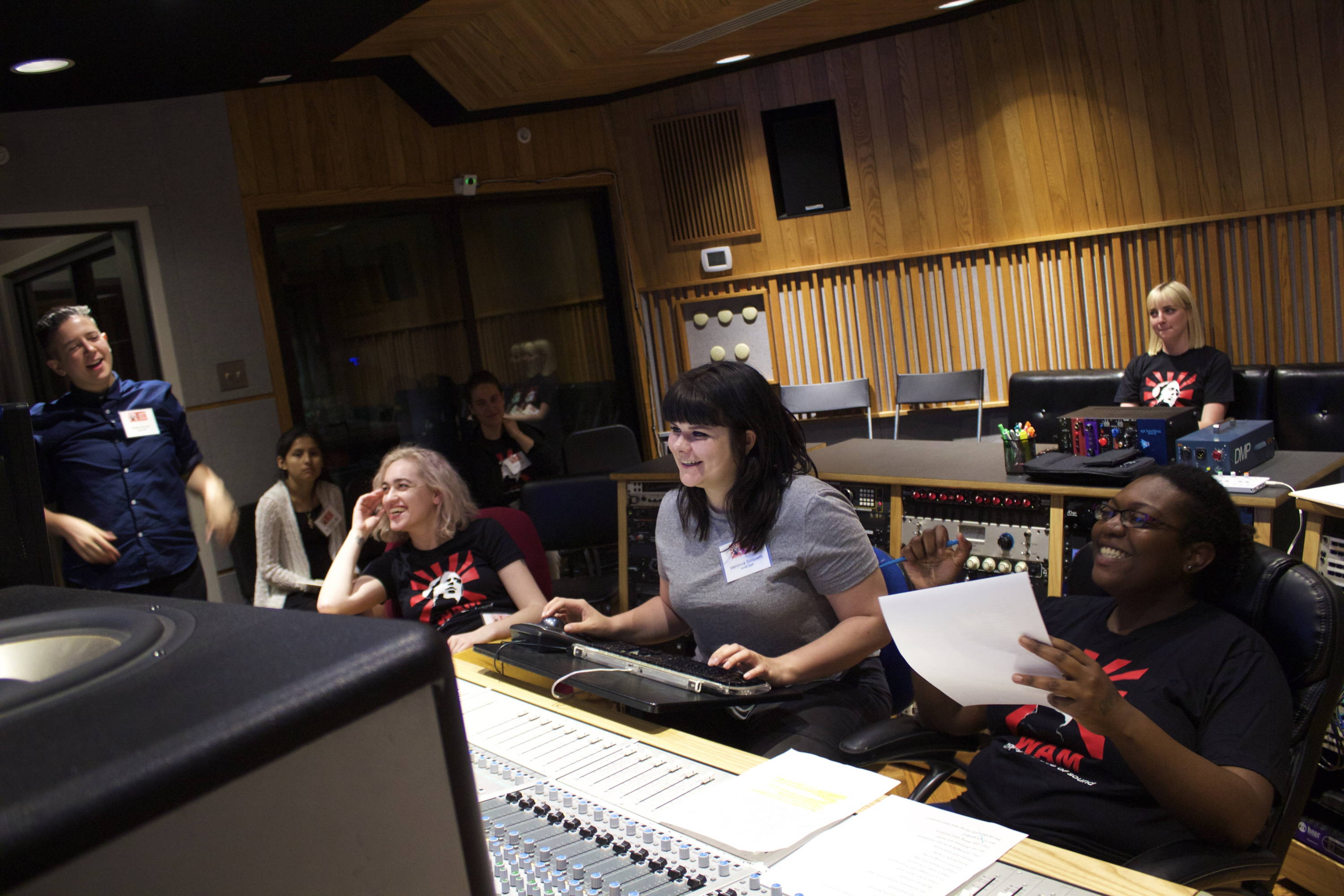 Since its beginnings, Women's Audio Mission  has been changing the face of sound by providing hands-on training, work experience, career counseling, and job placement to over 2,000 women and girls every year in creative technology for music, radio, film, television, and the internet.

In this post, we'll be hearing from three of the Women's Audio Mission staff: Terri Winston, Elena Botkin-Levy, and Cristina Ibarra.

Can you pick out any favorites from your students' work that you're particularly proud of?

ESPN/The Undefeated, “A Woman's Place is at the Soundboard: Women's Audio Mission Works to Change the Industry of Music”
This was an awesome project we did with ESPN/The Undefeated. They wanted us to create an anthem to accompany a feature on the history of Black female athletes. We collaborated with Oakland artist Rayana Jay, Trakgirl, the Disney Songwriter Blush and our all-Black female engineering crew recording and mixed it. This was picked up by Hollywood records and the music video aired on Good Morning America and The View.

Our engineers also recorded the single, “Higher” for The OGs, which are members of Beyonce’s touring band as well as Prince’s guitar player Kat Dyson. Just incredible musicianship obviously, but our engineers did a great job and the behind the scenes video shows the WAM studio in action.

How would you define your main role in the music community?

WAM is a San Francisco-based nonprofit dedicated to the advancement of women/girls/gender non-conforming (GNC) individuals in music performance, production, and the recording arts, a field in which women are critically underrepresented (< 5%). Over 17 years, WAM has provided training to 18,000+ underserved women/girls & commissioned 450+ artists/ensembles from 21 countries. WAM trains 3,000+ underserved women/girls a year & commissions/presents new work by local women composers/musicians/artists to SF audiences of 2,000+/year. WAM’s world-class recording studios are the only studios in the world built/run entirely by women/GNC individuals & has hosted projects from Alanis Morissette, Radiohead, & Timbaland.

How did WAM get started?

WAM was founded by music producer/recording engineer Terri Winston in 2003 when she was a tenured professor and creator of The Sound Recording Arts Program at City College of San Francisco. It started as a club of 10-15 women students and in less than two years resulted in over 53% enrollment of women in the program. Winston started Women’s Audio Mission as a way to collect and broadcast the best practices on recruiting more girls/women/non-binary individuals to the field. After WAM exhibited at the AES conference in San Francisco in 2003, manufactures donated over 10k in gear to help WAM launch the only professional recording studio in the world completely built and run by women and gender non-conforming individuals. And we’ve been growing ever since, recording everyone from Kronos Quartet  to Margaret Cho  to Neko Case  and Toro y Moi.

We are super fortunate that we have so many audio manufacturer partners that have made our studios so special. In constant use are our Audient console, Barefoot Monitors, Avid Pro Tools  HDX rigs, a great collection of microphones from AEA, Blue, Josephson, sE Electronics, Austrian Audio, Shure  and plugins from iZotope, Eventide, Universal  and Softube. And great referencing headphones from Audeze for our podcast and mix sessions of course!

Do you have any words of wisdom for people who might aspire to grow in their own careers?

From Terri - I started using headphones in the studio way back when I was a musician and noticed it affected my performance so I started looking for the holy grail. I was really picky about my guitar tone so I needed that to translate in my headphone mixes. I always use headphones in the edit stage of mixing to check my edits, fades and reverb tails, as well as referencing at the end stage of a mix to make sure everything translates to headphone listening.

During these times of critical social upheaval, Audeze would like to encourage donations toward charitable causes that can effect positive change. If you have the means, please consider making a donation to the equal rights organization of your choosing.