Chances are, if you are reading this, you may be a music/sound-maker of some type. Or perhaps you simply are a music fan, lover of Audeze headphones and as a result, someone who loves the finer points of listening to and enjoying music.

If you’ve played a video game recently, you’ve undoubtedly heard a high-quality music production that sounds like a blockbuster film or perhaps a song straight from streaming airwaves. But during what many consider to be the golden-era of gaming (where innovation was constant, and franchises we see today were literally born), none of this was possible. A standard mp3 for instance, at 128mbps is about 1 megabyte per minute of audio. The 16-bit Sega Megadrive in contrast, could literally only address 4mb of GAME ITSELF at any one time. On the earlier 8-bit Nintendo Entertainment System, game-addressing averaged about 128 to 384 kilobytes per game, never exceeding 1mb. You may be scratching your head a little at this point, wondering how they managed to get music onto these consoles. Congratulations - you’ve just wandered into the world of chip-based synthesis. Let’s take a few minutes and look into how two of the most influential consoles of all time (omitting the SNES for sake of space) utilized hardware chips to create high quality music and sound reproduction - and why it's coming back like Gandalf the White.

The Console is the Instrument:

The chips used in every console from atari until the rise of disc-based gaming were instruments in-and-of themselves, capable of creating different tones and timbres. In the hands of a creative synthesist, virtual instruments were able to be made and sequenced together to create scores of classic soundtracks that made gaming history. They did so through digital synthesizer chips. sometimes called sound modules, that were integrated into the hardware. These chips ranged from ultra simple to complex FM chips. The NES and Sega Genesis/Megadrive are two of the most influential, so let’s discuss what went into these chipsets, and then listen to some of our favorite soundtracks. 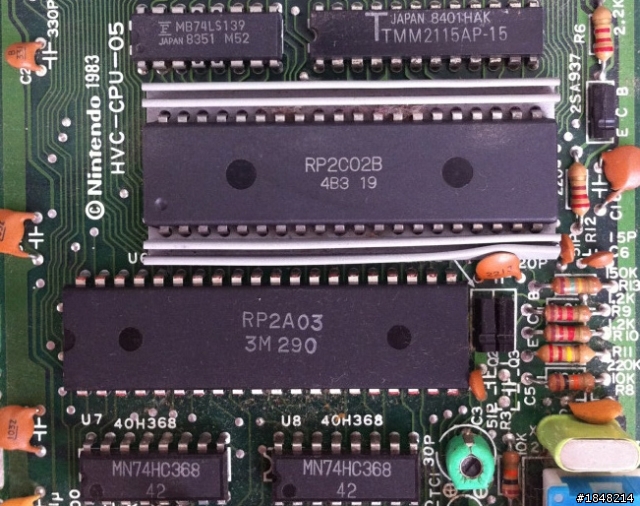 The NES made use of the Ricoh RP2A03 (called the 2a03) in the NTSC US version to generate everything from music to sound effects. The chip was capable of five channels: two square waves, one triangle wave, one noise generator as well as a digital sample channel (DPCM) and was technically capable of raw 7-bit PCM playback (album remix anyone?). Generally speaking, the chip was utilized in the following ways, although many creative composers hacked these processes to their liking:

Sound design was rather limited on the NES, but these days, it’s part of what adds to the nostalgia. Every sound is recognizable across the spectrum of its game library, and drives home that NES sound.

As gaming entered the 16-bit era, Sega also bumped up it’s capabilities to compete with Nintendo’s SNES console by calling upon Yamaha’s now-iconic YM2612 FM chip for service (alongside the TI SN76489). Frequency Modulation (FM) synthesis is a form of sound synthesis in which a frequency such as a pure sine wave is modulated by a “modulator” to create new sounds. By allowing different waveforms and modulators to continually modulate each-other, one can create complex waveforms, resulting in deep sound design capabilities. The simple waveforms in an FM synth are produced by something called an ‘operator’. Operators are essentially just oscillators and the number available per-voice depends on the particular FM implementation; six-operator and four-operator are the most common variants. Operators are connected either to other operators, or to the synth’s output. The specific routing of these connections is referred to as an algorithm. The algorithm chosen for an FM patch has a huge impact on the resulting sound and it very much determines the type of sound a patch can produce – piano, strings, organ, or whatever. Sega outputted stereo audio, a marked achievement of the era for them and their competitors.

Trackers, VGM (Video Game Music) Programmers, and How They Put The Music Together

If the chips behind early Video Game Music were a motor, VGM music programming environments were just about everything else. Without a method to control the chips, music would practically have to be made with a hex calculator and code, so creating environments for “easy” (read: 1994-easy) access to all of the parameters a sound chip had to offer was essential. By the late 1980s, the Commodore Amiga generated an entire musical movement based on its SID chip, eventually giving way to Karsten Obarski's Ultimate Soundtracker (1987) software which inspired great numbers of computer enthusiasts to create computer music. Trackers were programs that allowed for vertically-scrolling, fast music composition with access to all the parameters of the SID chip, resulting in an entire underground music scene. With it’s limited channels and the NES’ extremely limited memory capacity, music programmers worked hard to squeeze every bit of sound out of the RP2A03. You’ve probably noticed in Super Mario Bros 3, the somewhat abrupt audio dropouts of different voices when you get smacked by a goomba and shrink, or when you pop a few coins out and collect them in quick succession. This is because the chip is quite limited

By the 16-bit era, considerable advancements had been made and it was a bit of a wild west of music programming methods. In 1991, Jonathan Miller, Burt Sloane with Chris Grigg and Mark Miller, created a new platform in partnership with SEGA to allow for fast, flexible music-making on the Megadrive/Genesis.

Enter GEMS, the Genesis Editor for Music and Sound Effects. GEMS was the most successful environment for programming music on the Genesis and ran on MS-DOS on IBM computers. It connected to the Genesis via a rom board, which is an old school version of a modern day flash cart, and often included a serial port which connected to the expansion port. Finally, a MIDI device was used to send data into the computer which would then send that data to the Genesis, outputting audio to the listener.

DIY and the Not-Far-Future of Chip Music

Although the music industry and gaming advanced, there remained a diehard group of synthesists, programmers, gamers and musicians who continued to create chip music. Today, with the explosion of DIY instrument making and open-source coding, as well as incredible chip emulation from folks like Plogue, making chip-music (chiptunes) is more accessible than ever.